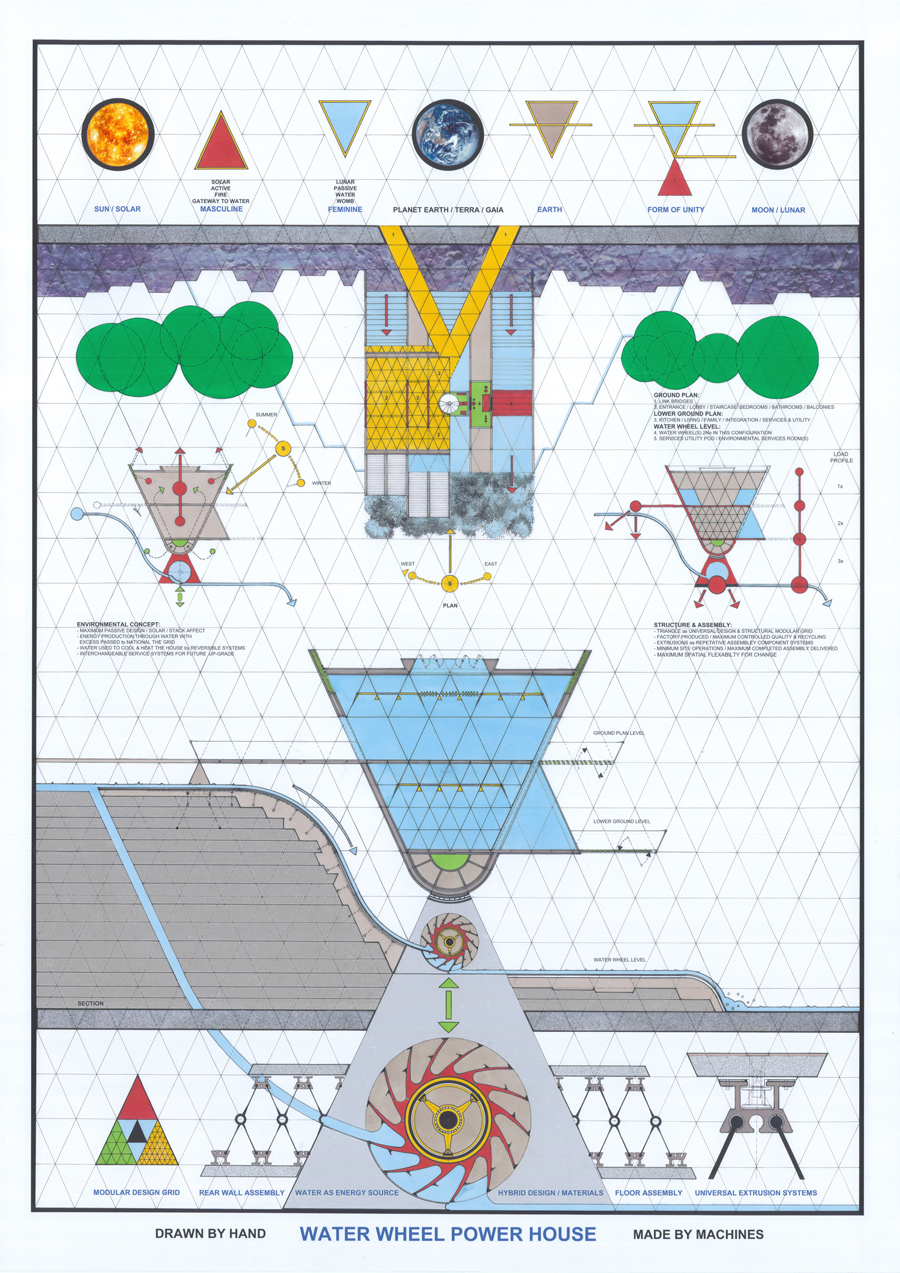 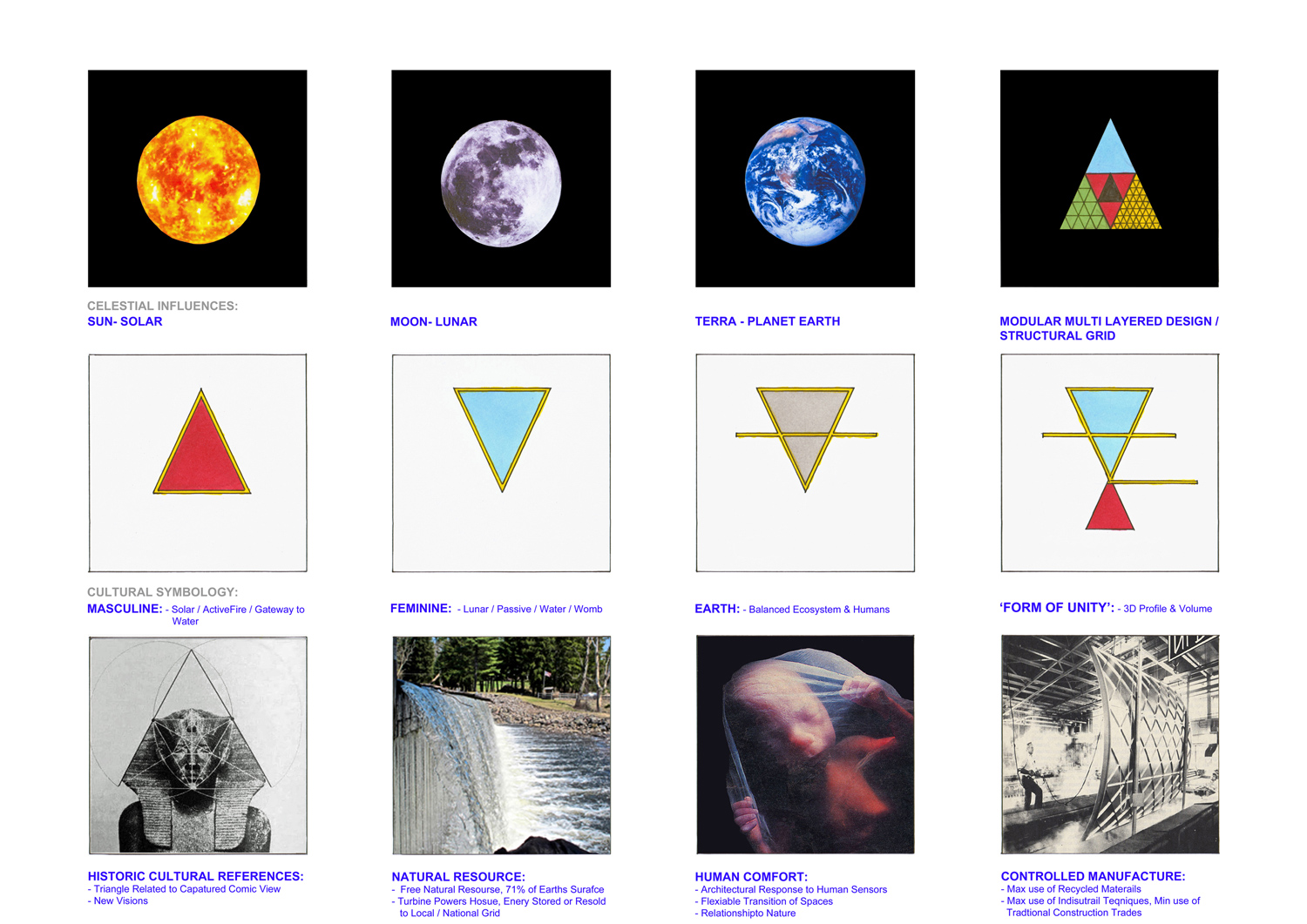 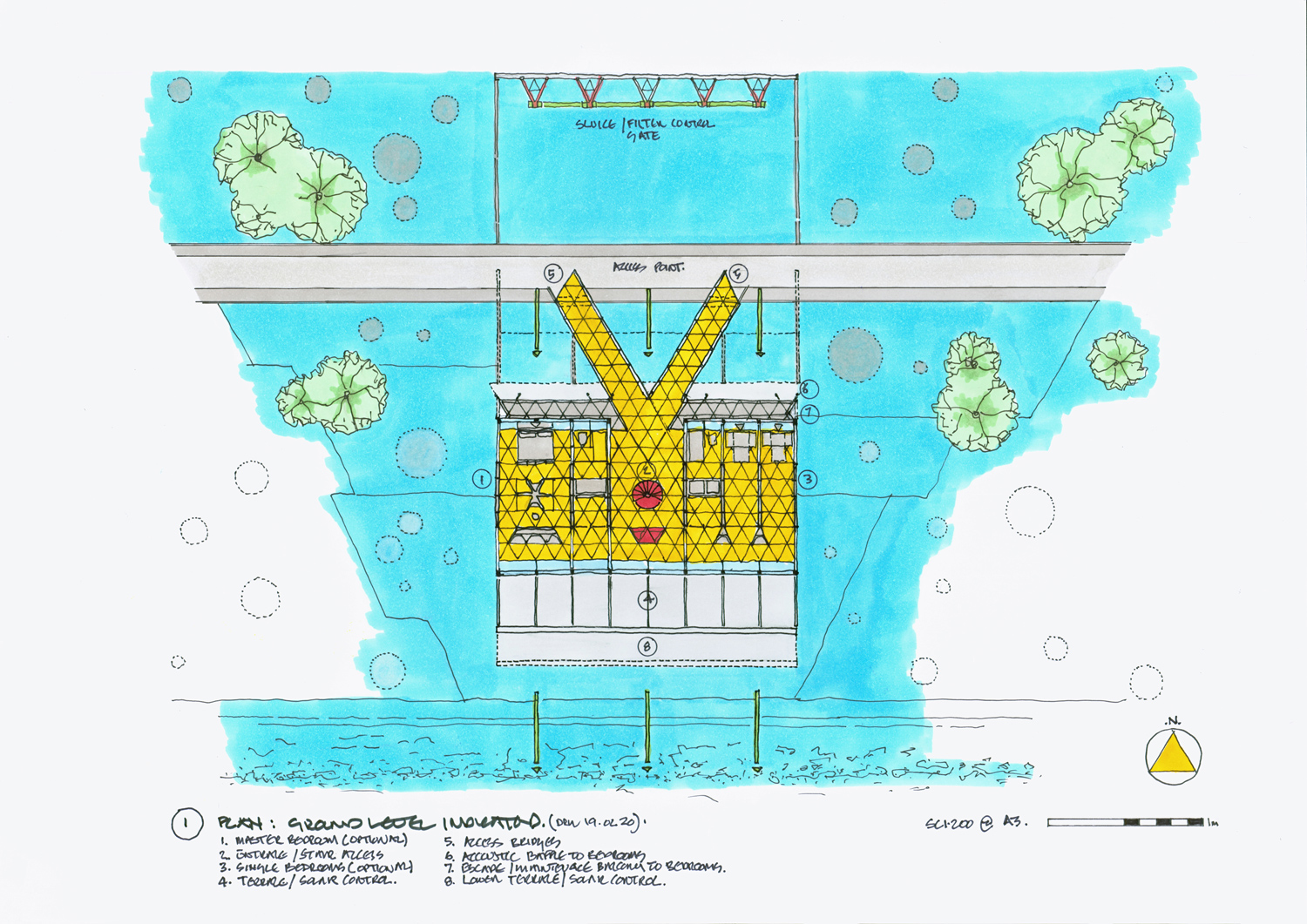 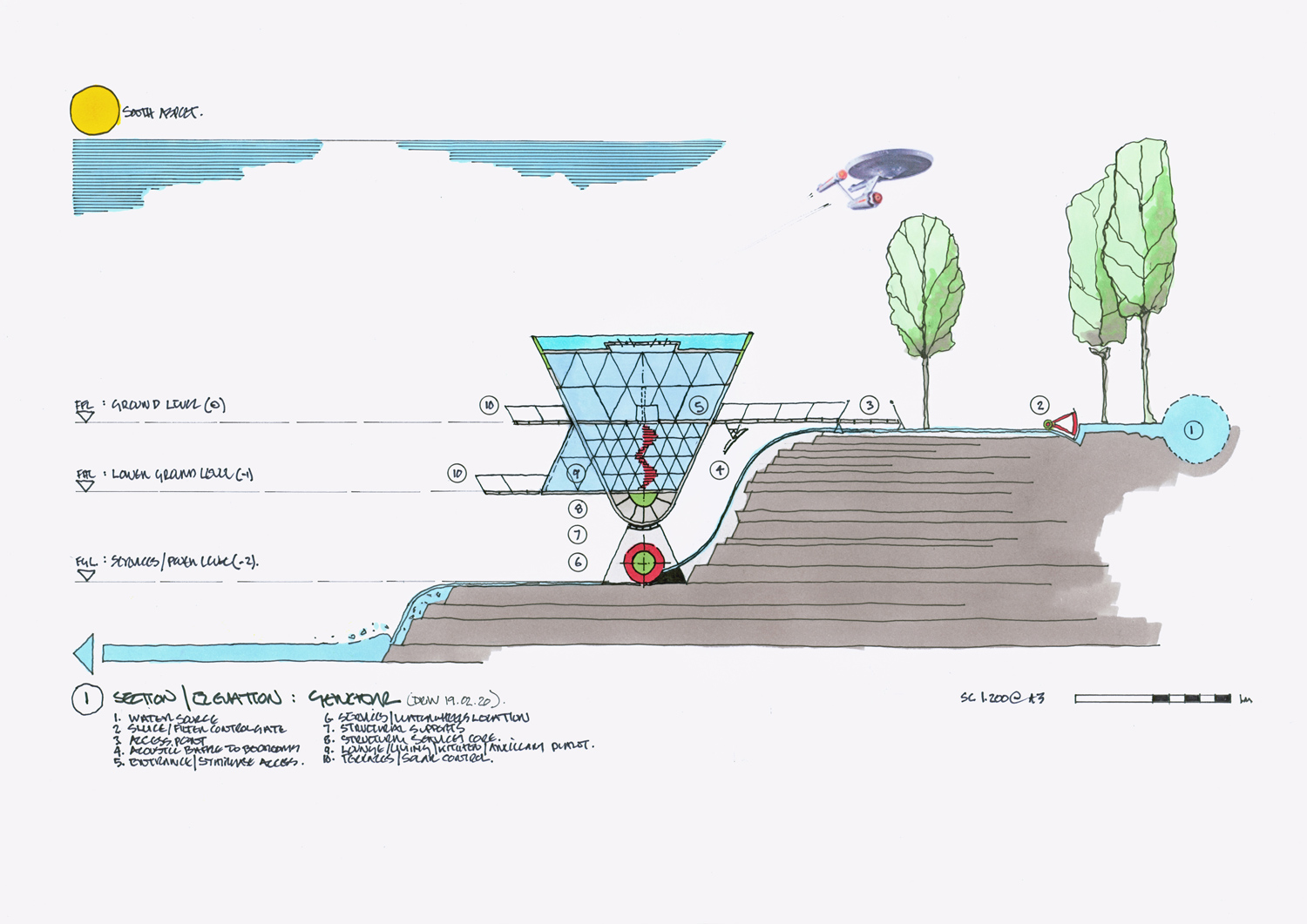 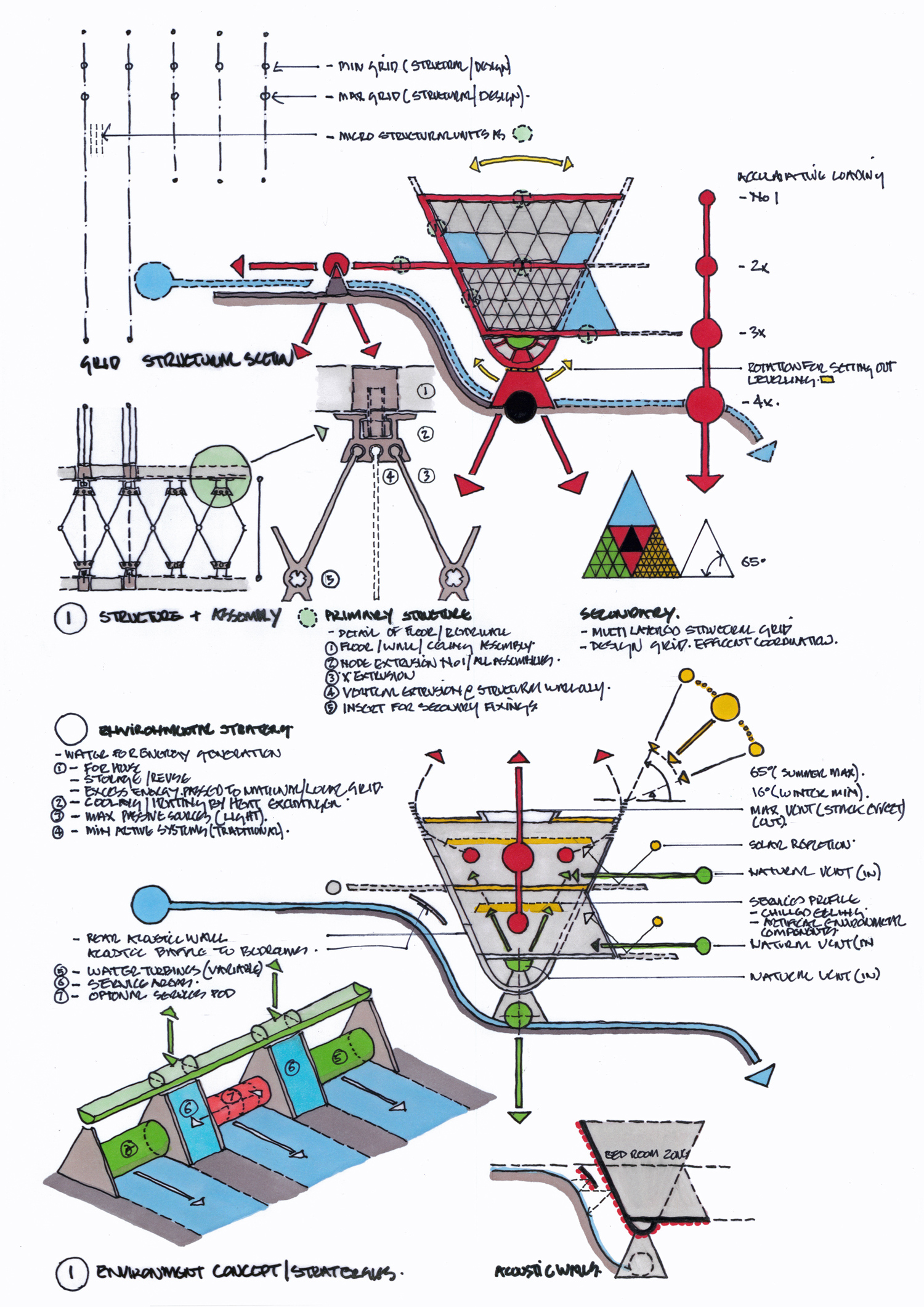 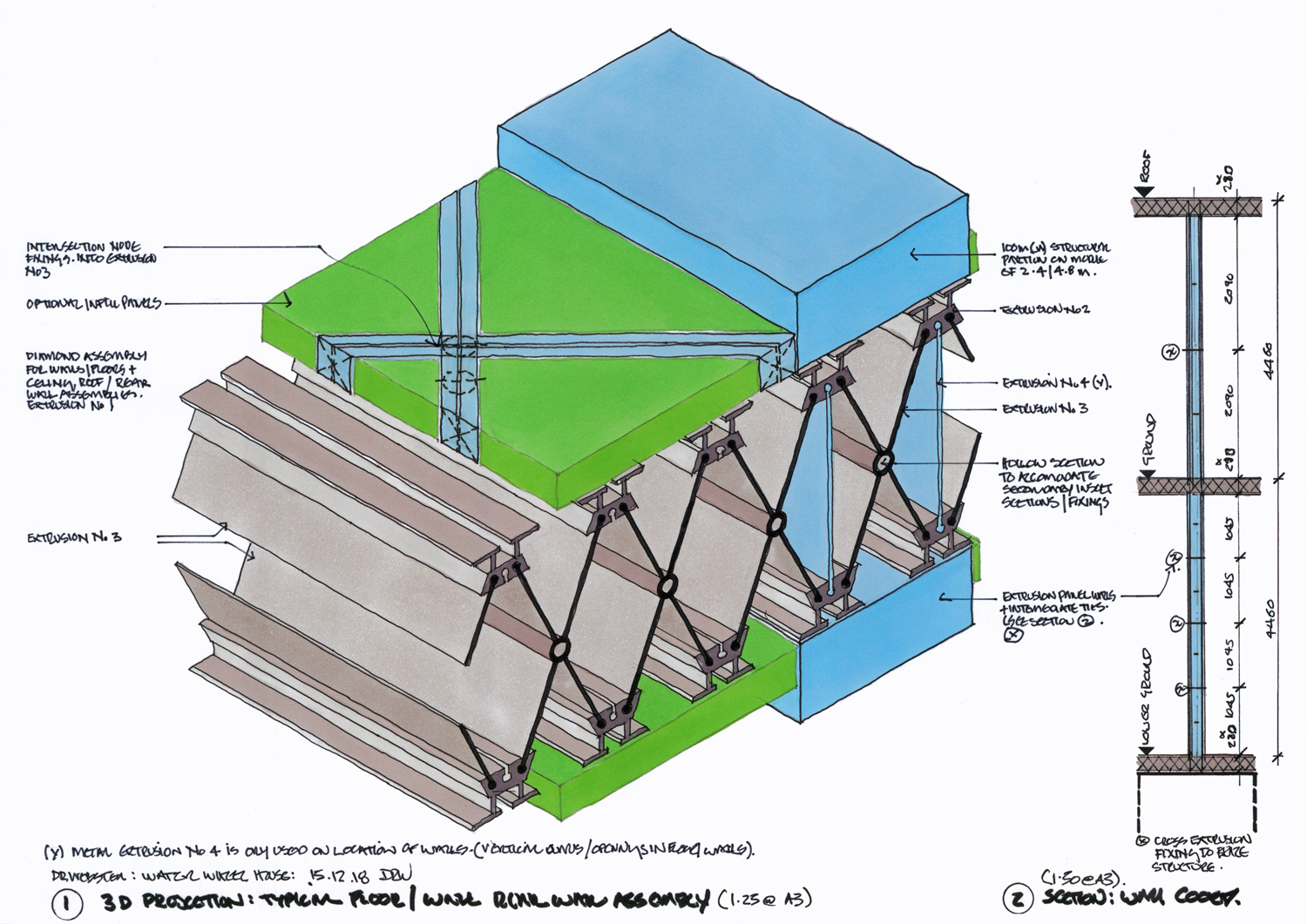 The ‘Water Wheel Power House’ is derived from a series of overlays based in cultural symbology of the ‘Triangulated Glyphs’- masculine, feminine & the earth, when interlinked they create a ‘Form of Unity’, which in turn is influenced by the sun, earth & moon generating a universal design & structural language. Through history the tringle is not just culturally symbolic, its known for its inherent structural characteristics.

Water is a fundamental to life with the human body being around 60% whilst the earth’s surface being cover by 72%. The human, earth is interrelated & one. It is this free natural resource the house taps into by merging all levels of the subliminal unconsciousness, whilst connecting it to its physical properties as provider of pleasure & source of energy, together they create a house that binds nature, humans & technology.

The house is entered from the1st floor above the flow of water opening up views of its setting beyond. Bedrooms / bathing are located either side of the staircase which leads to the lower ground level containing the living, utility & communal areas. The lowest level consists of the water wheels, service pods which are all interchangeable depending on the type of water chute & water wheel configuration is required for any particular location.

The use of water & water wheels devices was 1st recorded around 4000 B.C. Vitruvius was later credited for the development of the vertical water in 14 A.D of the Roman era a. Over many millennia it has been transformed from driving mechanical mechanisms to generating electricity. There are basically 3No types of modern wheels with the undershot wheel be adopted in this design. Research shows that it can achieve 100% efficiency of which 75% being realised, but with R & D this could achieve around 90%. The wheels for the house produces 9.2Kw/h per wheel (for the house 18.4Kw/h, with the average UK being 4.7Kw/h) well in excess of its own requirements, some excess is stored & but remainder sold to the national grid- figures are for this particular configuration only.

The triangle form is used throughout as a design & structural matrix increasing its density as requited. The house is entirely made from extrusions, fabricated under controlled factory conditions to maximise quality & recyclability minimising both wastage & site operations. The rear wall, floors & roof are constructed from ‘X’ sections that are interlocked & cross braced with infill panels. The supporting structural cross wall adopts a different extrusion profile that interlocks but also provides internal ventilation & services distribution. The external skin is a mixture of insulated & glass panels that are graphite coated for its environmental energy transfer properties & longevity.